Over 50 buildings are listed in the two Hanneys, split in roughly equal proportion. They range in size from the largest houses and West Hanney Church to some milestones on the Wantage to Oxford road.  Most of these houses are protected by two conservation areas too. It is some time since these areas, and the listed buildings of the two villages, have been reviewed. There has been a welcome recent addition, Orchard Cottage in Summertown, East Hanney.

The choice need not be confined to grand or larger houses. The retirement bungalow built around a century ago for the retiring headmaster, Mr Edwards, is one of Hanney’s less well known gems, and is a rarity of its type. 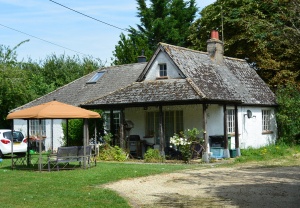 Three significant Hanney buildings are shown below. Details of two can be found in the attached listed building summaries for each village.  The third, The Malt House, is not listed but perhaps is a candidate for inclusion?  Sadly the thatched Malting Floor annex, visible in the photo, no longer exists.

in the period from 2017-2021 both Hanneys were involved in creating Neighbourhood Plans. One feature of these were illustrated reports, ‘Character Studies’, largely created by the History Group, which set out to capture the villages’ ‘character’ in social, historical and architectural terms. These offer a record of West Hanney in about 2018 and East Hanney in 2020. Both will form part of the villages’ submission to the Vale which aims to establish a vision of the present and future features of the village which have created their present character and which need to be maintained to preserve this.

The West Hanney report has been agreed by a process of village consultation and is attached below. The East Hanney version will follow when the consultation there is complete.

Back to Hanney Buildings