THE ROLE OF THE HISTORY GROUP IN VILLAGE EVENTS

The History Group is consulted fairly frequently on village developments and these pages will be partly used to highlight these enquiries as they arise. In recent years we have had some involvement in: 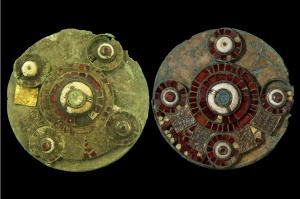 The West Hanney Brooch before[L] and after restoration[R]. The brooch was found in a 2009 metal detector rally. Members of the group assisted with, but did not organise, the rally.  The brooch is normally on display at the Oxfordshire Museum at Woodstock.